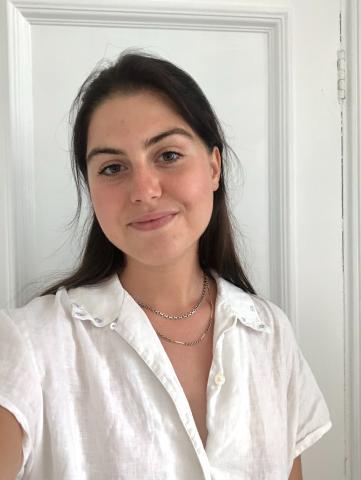 Hi, I'm Agnelle (she/her) and I am a recent graduate from Cambridge University in English Literature. Throughout University I have been heavily involved with all kinds of theatre, particularly Comedy, performing and writing as a member of the Cambridge Footlights. I've also spent time directing and producing Comedy shows in Cambridge and worked as the Smoker's Officer for the Footlights which involved organising, casting, directing and video editing our bi-weekly in-person and online Comedy variety nights. I've also been involved with 'straight' theatre in an acting capacity and am interested in pursuing this further alongside my comedy. Going forward, I would love to explore writing for the screen more, creating web series and films, learning about how production and directing works in a film and TV capacity and how it differs to that of theatre. I am currently working on writing a 4-part series which explores female friendship and 'endings' (think Fleabag humour meets an aesthetic akin to Gucci's Ouverture of Something That Never Ended and Guadagnino's We Are Who We Are). Additionally, I am currently writing my one-woman debut comedy hour 'As If' which will experiment with melding stand-up comedy and character monologues and thinks about all the things you're shocked or surprised you did or thought, the things you care about way more than anyone else, my incredibly short attention span and propensity to digress and lots more. I will be performing this in October of this year (2021) with a view of taking it to Fringe in 2022.